Trying to find a job as a new designer after graduation is a battle that no one really wants to face.  Everyone tells you not to worry because something will happen and without fail everything will fall right into place when you least expect it.  Not really what you want to hear when you’re sick of being beat by someone with more experience, but for my internship at Prime it couldn’t have been more true.

I’ve worked in the restaurant industry for quite some time and never thought it would land me an opportunity in design.  One slow weekday I was assigned to work at a networking event to tend to an appetizer buffet and supply cocktails to a group of working professionals.  I honestly wasn’t thrilled about it because I wasn’t allowed to have other tables and I knew it wasn’t going to be very profitable.  I made the most of the situation and seeing that it was a networking event started listening in on conversations thinking that maybe something might strike my interest.  I overheard Penny say something about Prime Advertising.  Growing up in Maple Grove, I had researched the company and knew it was a place I was interested in.  I bid my time and finally decided to introduce myself.  I knew I would feel a bit awkward, but really what did I have to lose?  I casually mentioned that I may be a waitress, but I was also a recently graduated fantastic designer.  I inquired about any job openings, internships, or just the opportunity to take a tour of the company.  We swapped information, and though I was proud of myself for saying something, I never expected anything would happen.

So here I am.  Actually, since my internship is coming to a close I suppose I should say “so there I was.”  I started my internship as I expect most people do, like a duck on the water.  On the surface I appeared to be calm and confident, but those feet were turning fast underneath wondering if people would like me, how everything was going to work, if I’d be successful, hoping I wouldn’t have to do any lame “internship” work.  Luckily, my internship has been far from lame.  I technically was part of the web department, but I had the opportunity to taste a little piece of everything.

I had the opportunity to work on a variety of projects from creating banner ads for the new myprimeguide.com, working on header images for websites, email marketing, and seeing how Prime’s content management system (Element z) worked in the web department.  In print I had a taste of the newsletters and worked with multiple clients in logo development.  I even got to sneak in photography work ranging from taking pictures at the Maple Grove Days parade, staging portfolio images, to a 3 location photo shoot for Galaxy Auto.  Overall, what I liked most about my time at Prime is that I rarely felt like an intern.  I didn’t have all menial tasks; instead I worked with clients and had independence.  For something unexpected, it turned out better than I would have planned. 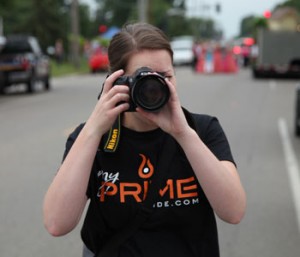 Let’s see, if I was reading a blog about an unexpected intern, I would probably expect some good cliché or gooey heart-felt advice—the kind that makes you roll your eyes a bit.  So here you go.  Don’t be afraid to ask questions.  Not only is that how I ended up here, but that’s really the whole point of your internship.  You’re not expected to know everything yet.  Think of it as a perk, you’re surrounded by people who have more experience and know the tricks and secrets of the industry, and since you’re the intern their basically expected to let you in on everything.  I also found that in many circumstances whoever was helping me discovered something new or rethought the process of how they were doing things in the first place.  I believe that would be called a win-win situation.

Here’s a good one to follow; make mistakes.  Everyone knows that information sticks a lot better when something goes wrong than when it works perfectly the first time.  On the same note; be prepared for the unexpected, and run with it, and while you’re at it take any opportunities to show your hidden talents.  My internship had nothing to do with photography, but because I had all my camera equipment with me and offered to take some product shots, I ended up doing random photography projects and two involved photo shoots on my own.

I’m sure I could think of more tidbits of advice, but I’m sure you already know them, and they would be far better served if you went out to seek them on your own.  So for now we’ll just say that I’ve put in my two cents.  In the end, I have learned a wealth of information and gained experience in areas that can’t be taught in school.  I’m very grateful to everyone at Prime who has helped me along the way and sparked the energy to help my career along.  I have truly enjoyed working with the staff and hope to keep connected with Prime in the future.  I am very thankful for the opportunity and glad that someone gave me the chance to start collecting my piece of “real-world” experience.