Around the Office dogs in the workplace, office dog, prime's office dog, tank the office dog at Prime Advertising 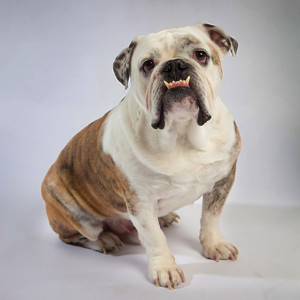 Like most Prime Advertising & Design employees, Tank has a title, meets clients and sits in a cubicle. So what separates Tank from the rest of the team? He’s an English bulldog, for one thing.

Prime’s official “Office Dog” according to his cubicle nameplate, Tank has been coming to work for the last 5 years with his owner, Multimedia Designer Roclyn Mewhorter.

Roclyn first brought Tank to the office temporarily because his allergies demanded extra care. However, coworkers quickly became rabid about the bulldog and insisted he stay on as the company mascot. Prime’s employees aren’t the only ones who enjoy Tank’s presence in the workplace. Clients are often eager to meet the bulldog when they stop by the office for meetings.

Although canines in the workplace might seem unorthodox, research shows a growing trend. According to the American Pet Products Association, 17% of U.S. companies—including Google and Amazon—have instituted dog-friendly office policies. While this trend is certainly convenient for dog owners, studies suggest pets in the workplace could benefit coworkers and clients as well.

A recent study by Virginia Commonwealth University found that dogs significantly reduced stress levels in the workplace and increased employee satisfaction. A second group of researchers found that pets helped lower blood pressure, while a third found a link between pet owners and increased odds of surviving a heart attack.

As for Tank, he spends his workday productively enough; hunting for crumbs, gnawing on his bone and napping. The bulldog loves being around people and drags his paws when it’s time to go home. 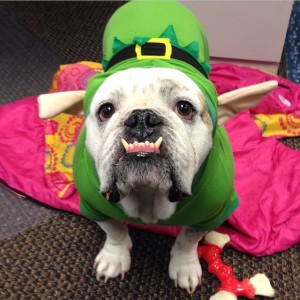 Are dogs welcome at your workplace? Could man’s best friend become a business best practice? Let us know in the comments!