Print is here to stay! Whoever thinks they need to stop doing print because it is slowly declining might want to recheck that information. According to the article “Print Is Dead; Long Live Print” by Leigh Flayton, print is still a critical piece in any marketing plan. The article gives some encouraging print advertising facts. “Meredith (a national media company) has seen 70% growth in print since 2001; 68 million print subscribers then versus 115 million today,” says Meredith Corporation CEO Steve Lacy, the publisher of such stalwarts as Better Homes & Gardens and Ladies Home Journal.”

Print is not dead and Prime can help you get noticed in this growing opportunity. Our print services include community publications such as Official City Newsletters and Community Guides, Special Event Publications, and Chamber of Commerce Publications. The City of Maple Grove recently completed a survey and the Maple Grove City Newsletter was rated at 92% readership!  Call today, 763-424-9406 to find out more exciting opportunities in your community and check out the rest of the article below. 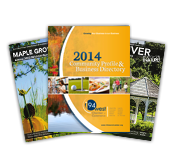 Even with the growth of digital, print magazines are here to stay.

The old saw, “print is dead,” may be the most overused quotation since Mark Twain famously quipped about the news of his own demise more than a century ago.

According to industry experts at CPR: Create + Publish + Reinvent, a recent magazine conference in New York City, print still is one of the most—if not the most—critical components of their business plans. Andy Serwer, Fortune magazine’s managing editor, said Fortune still gets the bulk of its revenue from print and that there’s “no silver bullet to digital.” In fact, his primary goal is success in print, digital and live events, and Fortune drives advertising across all three platforms.

When James G. Elliott, the president of his eponymous ad sales and marketing firm, started in the business more than three decades ago, he entered a yearlong training program at Ogilvy & Mather before officially working for the agency. He’s seen the industry survive extraordinary change—from its coming-of-age in the ’60s, to the “decade of the deal” that saw rampant agency takeovers in the ’80s, to the digital revolution of today. But Elliott says there are four things he knows for sure:

“Print is here to stay.

Digital is here to stay.

Mobile is here to stay.

Social is here to stay.”

My first job out of college in the early ’90s was in book publishing, and I remember many conversations at the time swirling around the idea of the end of the book. At first I was afraid—after all, I wanted a career in publishing, and now it seemed it was going to end before it even began. After some hand-wringing it dawned on me that the only constant is, in fact, change. Talkies wiped out silent films but they didn’t kill the movies. TV didn’t destroy radio (and today there is even a thriving satellite radio industry). And cable television, DVRs and Netflix haven’t killed the movie theater, network TV or anything else for that matter.

Serwer also spoke of Fortune founder Henry Luce, who conceived the publication in 1929 and published the inaugural issue in February 1930. Luce thought the financial crisis, soon to become The Great Depression, would be a blip, but the launch of his magazine turned out to be “tough sledding,” as Serwer called it. That prompted a collective chuckle from the conference attendees, and I nodded in solidarity when I heard the gentleman behind me whisper to his colleague: “Some things never change.”

Some encouraging facts about magazines

New titles are being published.

Meredith has seen 70% growth in print since 2001; 68 million print subscribers then versus 115 million today. —Meredith Corporation CEO Steve Lacy, the publisher of such stalwarts as Better Homes & Gardens and Ladies Home Journal